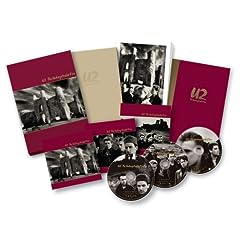 And you know it’s time to go
Through the sleet and driving snow
Across the fields of mourning
Light in the distance
It’s really quite hard to fathom it’s been 25 years since this album came out. Back then U2 were stars fresh from their last album War. At the same time I was obsessively ambient collecting albums by Brian Eno & Daniel Lanois, not the least being Apollo. So when these two forces finally met it was magic. These days having Eno & Lanois produce your music ensures critical acclaim, but at the time the idea of these ambient guys working with a post-punk band like U2 was unheard of.
And you hunger for the time
Time to heal, desire, time
And your earth moves beneath
Your own dream landscape
The Unforgettable Fire has always been my favourite U2 release, it was an amazing cassette(!) to drive to and will always be linked to a time where I made a couple trips out to Boisseivain to see my grandfather for what ended up being the last time.
And your heart beats so slow
Through the rain and fallen snow
Across the fields of mourning
Light’s in the distance
Oh don’t sorrow, no don’t weep
For tonight, at last
I am coming home
I am coming home
-A Sort of Homecoming