Travelling to photograph, like I did recently in India, requires you to be organized. Shooting all day, day after day, turns out you don’t have a lot of time to geek out. We’d start some days in Kolkata at 4am and I wouldn’t get back to the hotel till 11pm only to do it all over again the next day. So my workflow had to just work.

As you know I am a big fan of Apple’s Aperture. Over the 3 versions, and recent updates, Aperture has evolved and fine tuned itself making it my favourite photographic tool. I had a new 13 inch MacBookPro for this trip and Aperture was the first thing I loaded on it, the latest version, 3.0.

The key to making Aperture work for you, is to simply embrace it, and look to it for as many solutions as you can. The more you can work within it, the easier it is to stay organized. As much as you can reference your images, storing them anywhere on your Mac, letting Aperture manage your images in it’s library allows you to full realize it’s potential.

This was a trip of my lifetime.The biggest concern on the road was backing up my precious images. One of the biggest advantages of Aperture was the use of Vaults. With a couple clicks, I was backing up my images to two external hard drives. Each time Aperture updates the vault to include the images you’ve added to your library. It really can’t get any simpler, so consequently you end up backing up more often.

Our workshop consisted of one-on-one edit sessions after a long day of shooting. We didn’t have a lot of time to produce images for these sessions. Exporting an edited 200 processed versions from RAW was taking too long. After a few days I figured out a solution. All my cameras are set to shoot both Jpeg and RAW images at the same time. When at home I use the wireless adapter to send the Jpegs to a laptop and keep the RAWs on the card. My Nikon D700 produces amazing images right out of the camera 80% of the time. (we were working in some extreme lighting conditions) So when importing my images into Aperture, I set the import to set the Jpeg as master. Aperture stores both the Jpeg and RAW files together, but you only work on the master image. With the Jpeg set as the master, I could do slight tweaks and export versions very quickly. Those other 20% of images that needed that little bit more attention, I’ll right click on them, and change to the RAW as master. Suddenly I had the flexibility of RAW for those few images than needed it.

Another feature in Aperture I used on my trip were Smart Albums. Smart albums in Aperture are no different that, say, the smart albums in Mail, you can set different parameters to sort out images in your projects. All my images in Kolkata reside in one project, with smart albums sorting the images based on each day. I simply sorted with the calendar option and anything added on that day was in that smart album. This was crucial for fast edits. Oh BTW when you travel around the world, remember to change the dates and times in your cameras. Having your camera record the correct time and date is crucial in sorting your images properly, as well it can help you recall how the events when down. But if you forget, don’t worry, you can adjust things on import or even in the metadata after the fact (is this one of the first lessons in the Apple Certified course, see below) 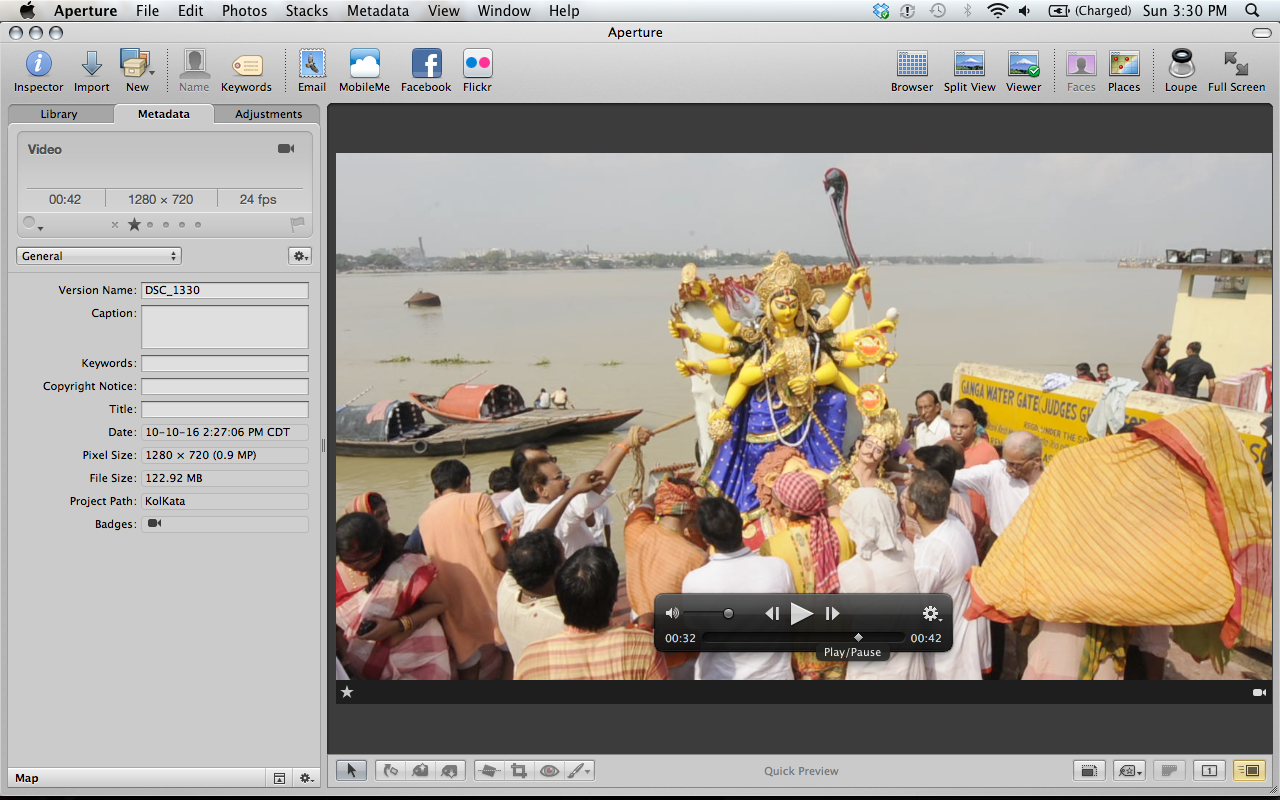 I took my D300s with me, as back up, but also to record video. Previously versions of Aperture would prompt you to download the files to another folder outside the Aperture library. But with ver3.0 Aperture handles all the video clips your DSLR produces, sorts them in the library, backs them up to the vault, and allows you to share them through all the various methods. Now there’s one less reason to work outside Aperture! Once again I created a Smart Album based on file type, within my projects to have the video clips all in one place.

While away, I kept in touch with my friends on Facebook simply by picking a couple images and hitting the Facebook button in the toolbar in Aperture. Hitting the email button, Aperture placed my chosen images in an email, resized and ready to go. Staying in touch was so easy!

Now that I’m back,  and have edited my images, and posted them on SmugMug using the free SmugMug plugin, I wanted to create another method of showing my images off. Once again Aperture is able to create effective and stylish slideshows easily. While not as fully featured as iMovie, the Slideshows have some great themes and more than enough settings to customize your slide show. You can share them easily on MobileMe, Flickr or Facebook, again with the push of a button.

Here’s the slide show I made in Aperture

Eventually I’m going to create a book of my images. I can use the book layout feature in Aperture, export to Apple or other third party suppliers who’ve created plugins or even save it as aPDF and produce it with another book maker, such as Blurb.

So as you can see Aperture is a great program to manage your images while on the road. (I didn’t even touch on keeping the same library in sync on different machines, when you get back home, or using Places to crate a map of your travels.)

If you want to learn more all about the features of Apple Aperture, I’ll be teaching the Apple Certified Aperture course at New Media Manitoba, Jan. 8th-9th. You can learn more about it here.