Hard to believe it was ten years ago! The concert was promoted very little, by chance we both saw the same commercial, once on TV otherwise I wouldn’t have believed it! As I mention to Rob, Prince was already a legend then,.. and he is still on top of his game today! Great show! 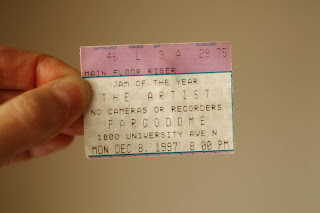 The Redeye Complex
Ten years ago today, I saw one of the best live shows I’ve ever seen. It was in Fargo on a Monday. The ticket doesn’t tell you who cuz Prince was having some branding issues at the time. A side note story to this day was that while Ian, B, and I were waiting for the show to begin, Ian goes schmoozing with some people he recognizes in the crowd. The story goes that those people phoned him that day at work and was told that he “went to see Prince in Fargo tonight.” “Prince is playing tonight!” was the reply and the client drove down as soon as they heard that. Isn’t that the what happened Ian? hehheheh It’s a good story anyway. (I found my ticket just a couple days ago while looking for some computer parts. That’s gotta go on the blog. What a coincidence.)