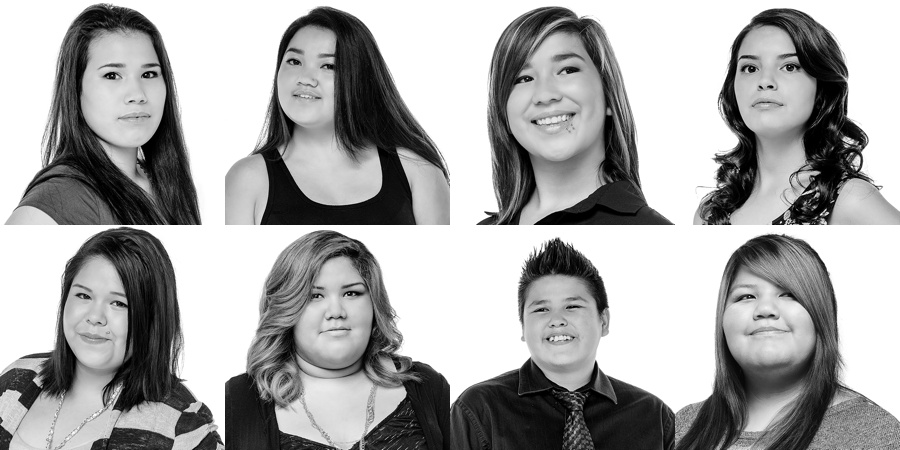 Today is Oct 1st and the beginning of the Flash Photographic Festival for the entire month in Winnipeg.My project is a collection of portraits of young women in a program called Building Women leaders of Tomorrow. The title of the images is called The Strength of Her. But first a little back story, on how it all came about.

Back in June of this year Jana Gauthier reached out to me on Facebook. She got my name from Lisa Delorme Meiler, a designer who I have worked with and a fabulous painter. Lisa was already involved in the program working with the girls to produce their own artwork.

Basically Jana had this idea of getting me involved some how with this program. We met up and Jana talked about how this small group of young women are working on over coming some stuff and learning to become future leaders. Jana’s passion for the cause and her obvious love for these girls had me instantly convinced I had to get involved. It was then it struck me, we could create the images and show them as part of The Flash Festival.

Fast forward to August and suddenly we’re having the photo shoot. My friends Viz and Stephanie were gracious to donate their professional services in Hiar and Makeup to give the girls a real experience. I felt it was important for them to feel the attention and fused everyone does in a full fledge photo shoot. I’ve seen the transformative power of a photo shoot and new what seeing themselves in a new light would do. By the time of the photo shoot, tragic event locally had catapulted the plight of young aboriginal women in Canada to the front pages of the nation’s media. Our little photo shoot suddenly became a “good news” story that CBC covered extensively. Needless to say everyone had a great time and enjoyed seeing themselves in the photographs. Seeing people’s positive reaction to themselves in a photograph I produce is what gives me the strength to continue. It’s just the best feeling!!

After the shoot the girls worked with Katherena Vermette an awarding winning poet to produce a series of poems. I took phrases from these poems and tried to line them up with a image of each of the girls. The images will be on display at Wahbung Abinoonjiiag Inc.a centre established to empower children and their families to break the cycle of violence. My hope is that the images inspire the many people who visit the centre.

I ‘ve said this for many years and I truly believe this: For Winnipeg to grow and prosper as a city we need to find ways to empower the aboriginal community. These recent months have hi lighted that even more so we need to support young aboriginal women. If nothing else I hope that through this project, these young women know and understand I care about them and want them o be successful leaders in OUR community.

The website in support of the show is http://www.ianmccausland.com/The-Strength-of-Her Click HERE to see the images, read the bios and poems and everyone who helped out with this project